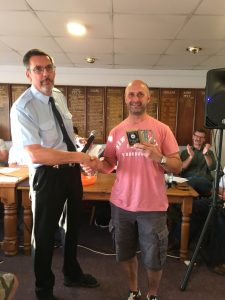 The CFI’s Cup is awarded to the student, who, in the opinion of the CFI, is the overall best student!

This year it has been a particularly difficult task as all 11 new licence holders could have been a worthy winner as they have each impressed us in their own special way. The nominations this year are:

So……. the award this year goes to the student who has most impressed us with their meteoric level of improvement. They came in to the aviation world with no previous flying experience or knowledge, and have diligently and methodically applied themselves in a dogged and determined manner. In the face of adversity, they have always remained cheerful and optimistic which makes their achievement all the more impressive and rewarding. Congratulations and well done to … Robin!

This entry was posted in News. Bookmark the permalink.
← Student of the Year 2018
Fly-Out to Caernarfon →